Almond Blossom Amongst the Lava

On our “almond blossom” walk today, we came across a simple shrine outside the mountain settlement of Las Manchas. Here, the villagers celebrate that their prayers were apparently answered back in 1909, when a huge lava flow from the Chinyero eruption almost engulfed their homes. The lava stopped flowing … but just a few metres from their back doors!

In the second photo we see the El Bicho tunnels passing 1km through the rocky mass of La Hoya. Opened in 2015, they have helped to make this mountainous area so much more accessible. 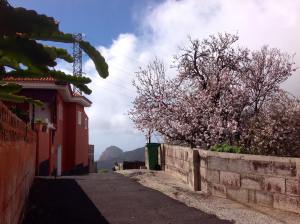 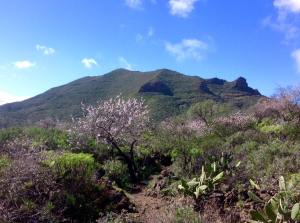 We made a second attempt at the almond blossom route in Santiago del Teide today. It was well worth it – stunning. I’m so glad we went completely off track and gave up last week – it was much nicer weather today …! 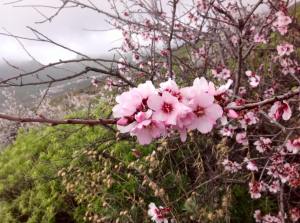 It’s our 9th wedding anniversary today. Pottery. So J picked up my gift on our hike earlier. The old romantic …!? 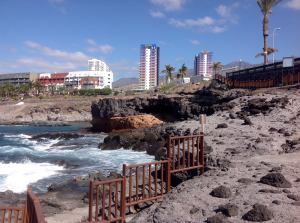 We took a stroll down memory lane this afternoon. Many years ago I used to walk to Playa Paraiso from Callao Salvaje, not because it was a particularly desirable destination … it wasn’t … just for some post-lunch exercise! At that time, PP was a tired resort, even before it had started to grow old. Now, although there are still some reminders of the old tatty PP, it is definitely on the upward curve, with an attractive promenade and fancy hotels. It even has a proper “playa” now, with sand, to live up to its name!

Of course, the newly opened Hard Rock Hotel is the cherry on the cake, and decidedly 21st century swish if you like that kind of thing …

What a great walk today – and not just because it was flat! Starting and ending at Palm Mar around the Malpais (badlands) de Rasca and passing the lighthouse at Rasca Point. Arguably the most southerly point on the island … 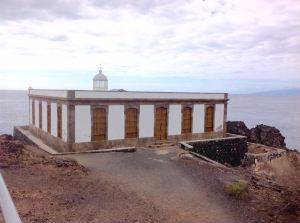 The old and new lighthouses sit side by side on the lonely outcrop at Punta de Rasca, guiding seafarers through the strait between Tenerife and La Gomera … 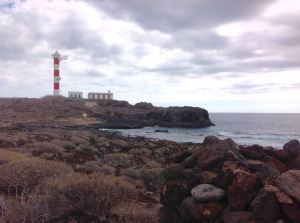 We Do Have Seasons Here! 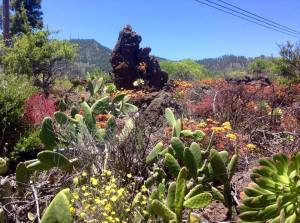 Looking towards the Erjos hills from Santiago del Teide in the northwest of the island. The first pic taken in late May and the second two days ago. The changing seasons …! 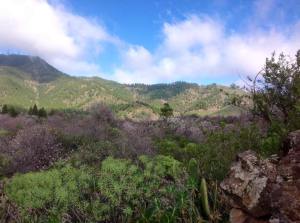 The Error of Our Ways!

In the terms under which Theresa May and Donald Trump apparently operate, we had a successful mission today, walking amongst the lava and almond blossom above Santiago del Teide! The fact being, in the absence of any “alternative facts”, that we made a catastrophic error in our map-reading does not take away from our success. After all, we did eventually successfully establish that we had made a huge mistake! Thereafter, abandoning our hike, successful though it was, to return another day! Here, I’m smugly pointing us in totally the wrong direction, coincidently, roughly in line with Florida, USA …

Those that know (not us!) say the almond blossom is early here this year. It was looking good on our walk yesterday … 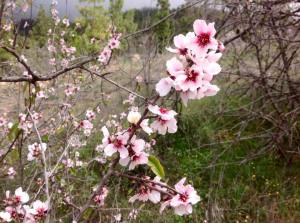 A Wee Bit Wet and Weary!

Heads in the Clouds
We walked into the clouds today from Ifonche, not deliberately of course, sometimes it just happens that way! At about 4,000 ft, just before we got a little damp, we came across this wine press at an abandoned farm-house in a clearing in the pine 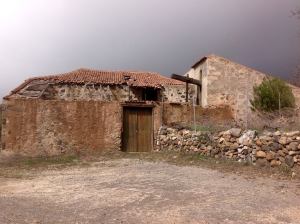 forest. Happily, the grapevine terraces beside the finca still looked tidy and well-maintained, ready for next summer’s crop.

Later in the afternoon, after descending in mist from a narrow rocky ridge between the two cavernous ravines that are the Barranco del Rey and Barranco del Agua, we retreated from the Ifonche uplands area, leaking just a little at the seams, and shivering ever so slightly at 11°C. However, normal service was soon resumed back home in Silencio as we quickly drew the chill from our bodies in warm sunshine, at a more familiar 23°C …

We met these guys when we were walking earlier this week … 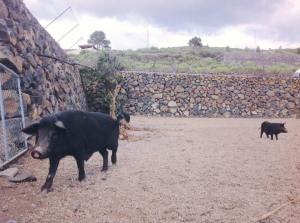 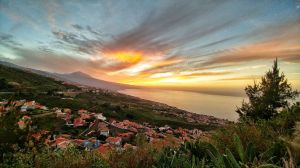 The Place Amongst the Pines

Another walking route tried out today. Amongst the pines high above Adeje and Barranco del Infernio. Three times Bennachie height for our friends at home in NE Scotland! Only 30 minutes from the south coast but a whole different world away … 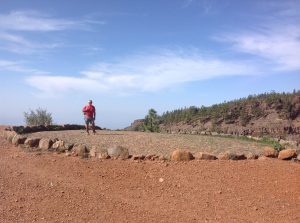 A fabulous walk today from the farming village of Ifonche into the mountainous pine forest. This stone circle is different from the ones we know so well in the north-east of Scotland. In the Scottish version they are ancient ceremonial sites from 4,000 years ago. Here, known as “eras”, they have had a more practical purpose for the last few hundred years … threshing corn harvested from the hillside terraces …

The First Romeria of the Season – Arona

We visited Arona town today to enjoy the first Romeria of the new year. It’s a special event here and reminds me a little of the summer agricultural shows at home. Albeit the costumes are a little different. These photos are taken just before the start … 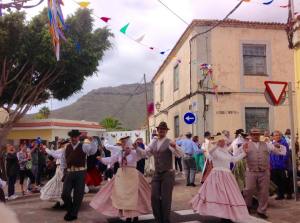 In Tenerife, traditional rural folklore, including singing and dancing like this, are celebrated at “Romeria” festival days throughout the year. Today’s event in Arona, in the hills above Los Cristianos, was the first of the 2017 season and on a smaller scale and more intimate compared to some in the North of the island we have attended … but none the worse for that!

As afternoon wears on to early evening, goatskin wine flasks are emptied and the cheeks of the dancers get more and more flushed …

Romeria on a Roll … Buen Rollito …! 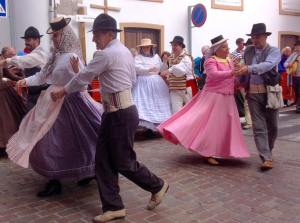 The Arona Romeria in full swing …

And … relax! The Romeria parade ends. The animals chill, and the dancers and musicians too … 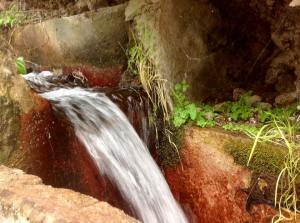 Today’s walk above Valle San Lorenzo followed water channels much of the way. I say walk, but it was more of a rock scramble for the most part. Any sane person would have turned around at the water pool. Good fun though … 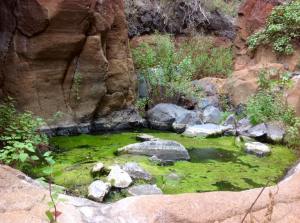 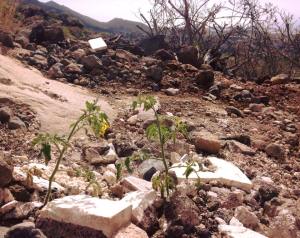 Growing amongst sand and rubble, these brave wee tomato plants we spotted on our walk today are coming on well … 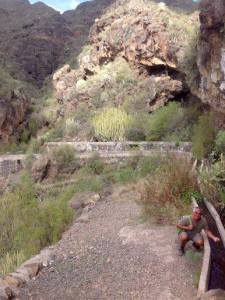 With the explosion of tourism over the last fifty years a number of desalination plants have now been deployed to supplement the natural supply of water from huge underground reservoirs deep within the core of Tenerife’s rocky mass. The water has drained into these reservoirs over millennia from melting snow, mountain rainfall, and pine-forest dew. Today our walk/rock scramble took us deep into the narrow ravine of the Barranco de Chijas where, at a “Galeria”, a horizontal bore hole draws water out into stone and concrete channels that snake around the cliffs and hillsides to form part of the “Canal del Sur”, flowing down to the farms, villages and towns below …

Some stunning views from high up above Taucho today. It made the way too steep climb worth it …

Flowers at Our Feet All the Way

The 7th of January, and signs of Spring in our hike above Taucho and La Quinta today. Even the almond blossom made an appearance … 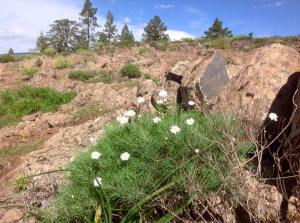 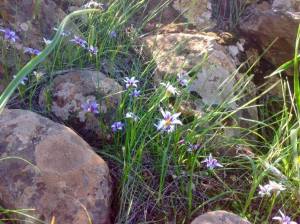 We hugely enjoyed our walk today, 4,000 ft up in the hills above Costa Adeje. The temperature was just over 20°C, blue skies, fresh breeze, no flies … perfect walking conditions, and stunning scenery all around! Technically it’s Winter here, but Spring was well and truly sprung all around us in terms of so many varieties of bright and beautiful flowers at our feet.

Much of the open forest that we walked through had clearly been subject to an extensive forest fire at some point in recent years, but the Canarian Pine has an amazing ability to survive and re-generate with no lasting damage save for charred areas of bark …

Tonight is the big night of the year for children in Tenerife, the equivalent of our Christmas Eve … after they are tucked up in bed the Three Kings from the Orient arrive bearing gifts … 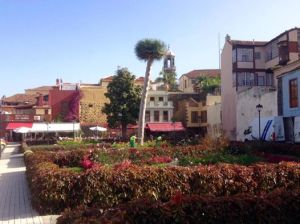 A quick trip to La Orotava earlier this week to collect mail, following our re-location from El Norte to El Sur. The perfect excuse for a coffee, or more precisely, un cortado con leche y leche, (involves condensed milk, yummmm!) in one of our favourite squares …

Keen to check out the new TF1 autopista link road to Los Gigantes (sad, I know, but true!) we headed there this afternoon. The road is fab but, happily, the photos are of Los Gigantes … 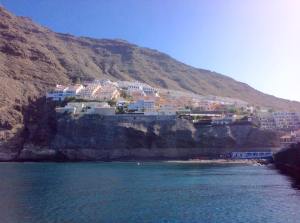 To start the new year, very many thanks to MeteoLaMatanza for a fabulous collection of photos from the year just past, all taken in our amazing island of Tenerife … 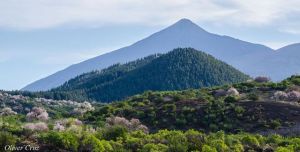 This site uses Akismet to reduce spam. Learn how your comment data is processed.

Search for a Walk