Goatherds and their goats have right of way everywhere here. This is just outside the supermercado I popped by earlier, in a relatively built up area above Puerto. Initially, I thought the man had collapsed but the rapid appearance of his herd and his shouted commands to his dog allayed my fears! He was just having a wee rest. The only thing missing is a clutch of hens – they, too, appear everywhere …

It was a very different landscape again yesterday in Teide National Park. So dry and rocky but plants, mostly unique to Teide, still flourish. The Red Tajinaste is stunning … each plant lives only one season. Then it was a drive down through a sea of cloud to sun again … 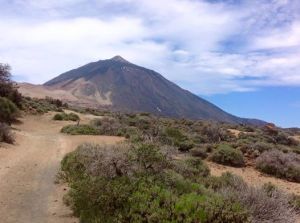 Teide yesterday- from high up in the national park and from our place. Also how it looked only four weeks ago. The last of the snow on the north face will melt over the next few weeks (I think!) …

We’re going to La Orotava to try the local Chinese for supper. Waiting on the 101 GuaGua at mo. This is “our” GuaGua stop. And the view back to our place from it … 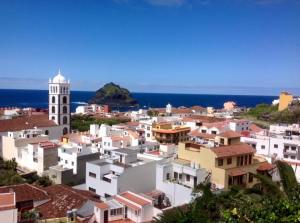 It was a wow spectacular moment today when we visited Garachico – so stunning. It was the capital of the island – a thriving commercial centre and gateway to the Americas – until a huge volcanic eruption in 1706 completely destroyed the harbour. It is now a thriving small town and a “must see” for visitors to the North … 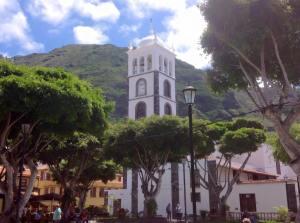 The Canary Islands has the second highest level of gender violence – primarily violence against women in the family home – in Spain. Each municipality is investing heavily in educating children from a young age and running courses and counselling for all members of the family. “MachisNO – por una isla libre de machismo” is the slogan and seen everywhere. This is some work we saw in Garachico town hall today … 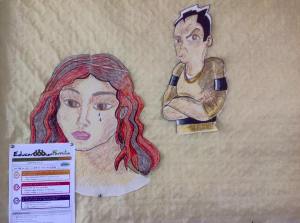 Walking from our place exploring the El Rincon (The Corner) today. It’s a rural area to the east of Puerto, below where we are (and one of the flatter areas of this hilly world) levelling out above the cliffs. No sun till late afternoon today but good shorts and t-shirts walking all the same …

It was over to the West today, with a visit to Masca, a tiny village about 50 kms away. It’s one of THE destinations for tour bus trips and it is obvious why. The Teno region it sits in consists of spectacular rocky mountains, some of it quite alpine looking (minus the snow!) … 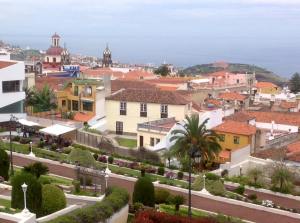 We walked into La Orotava earlier. It is one of the oldest towns in Tenerife and has been home to wealthy landowners and merchants over the centuries. Puerto de la Cruz was originally it’s port, then called Puerto de Orotava. These pics are taken from the Jardines Victoria -a rather grand public park in the centre of the old town …

We visited Icod de los Vinos yesterday. It is one of the 3 main wine producing areas in the North but better known for its thousand year old Drago tree …

End of an Era 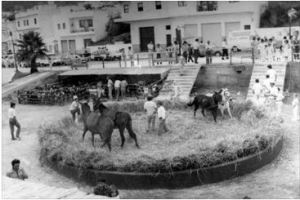 Many farms we pass have these, now unused, threshing circles (eras). I’m not sure if we ever used horses or donkeys for this at home. I don’t think so … 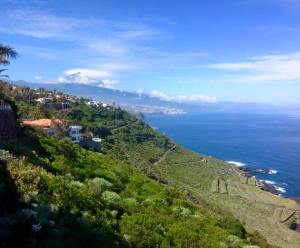 It was 5 miles east today to the El Sauzal coastal sendero (walking path). Previously this bit of the coast was full of wee huts – no electric or water – that locals had built themselves to spend weekends and holidays in. The Ayuntamiento (council) took steps to demolish these a few years ago and it is now a man made path with lots of great rocky coves for

swimming, sunbathing and fishing. There is still lots of bad feeling about the huts being destroyed – our friend Gema’s family being one of those affected. Today was very hot and sunny so perhaps opting for the steep start and finish to the walk wasn’t the smartest move … 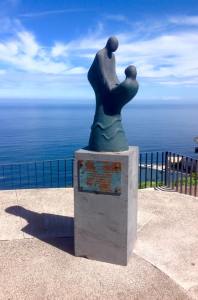 At the start of today’s walk in El Sauzal there is a memorial to commemorate the bravery of local fishermen in 1966. An aeroplane had to make an emergency landing off the coast and all the fishermen rowed out in their small boats to save the 40+ people onboard. All but one man survived. He refused to leave the aircraft. I’m unsure why. Isn’t the statue appropriate … 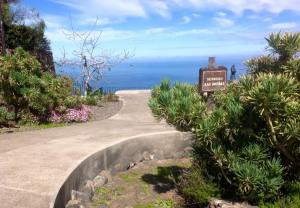 We were in Puerto earlier and, down by the port, we found ourselves in the midst of what seemed like the Tenerifiño version of the Masterchef finals! Their basic ingredients are pretty much fruit and veg – and the host is the guy in the orange jacket … 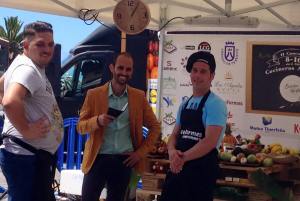 As Different as Night and Day

It was off to the East coast today and a very different landscape. The Malpais (badlands) of Güimar consist of the results of volcanic eruptions around 10,000 years ago. This is very recent – apparently! – in comparison with other volcanic landscapes across the Canary Islands. It

is now colonised by some amazing plants and tiny wee flowers, which seem to thrive despite the very dry conditions. It was stunning in a different way … 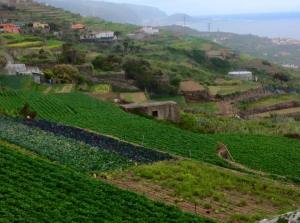 A steep 600 metre walk up Barranco de Ruiz this afternoon. Then downhill through farmland to Las Aguas and along the coastal path to the tiny, but stunning, hamlet of El Rosario and back to our starting point. This area is La Guancha – a fertile, farming municipality. We saw: tatties; cabbages; cauliflower; beans and many varieties of lettuce. No sun today but beautiful all the same …

The Victorian signal box at El Rosario. Except no trains on Tenerife (and never have been) …

Some of the plants and flowers we saw today. The Tenerifiños here are complaining about how slow Spring has been to arrive. It seems to be here now …

Only one more from today, I promise! For us, this typifies the area we live in – a typical Canarian house; giant cabbages; a row of Amaryllis and huge white roses. All perched right on the coastline …

Today – and yesterday – was Pinolere’s annual Cheese Fair. Goat’s cheese is the cheese of choice here, with every variety imaginable. The fair celebrates all things goat, local produce and rural life. Today was the turn of the Dogo Canario (recently recognised as a breed unique to the Canaries) to star in the show ring. Yesterday it was the goats and 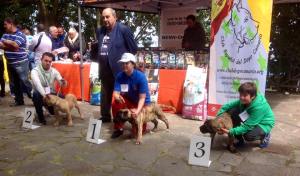 cattle. It was all very interesting and incredibly busy. The cheese stalls in particular were very crowded – hence no pics! Then a nice easy walk home – all downhill …

This is more J’s style. He’s awaiting the start of the Brew Dog revolution here in the Canary Islands.

We’re at the “cheese” fair in Pinolere. And good news – there’s a mojito “natural” (i.e..white rum and sugar cane) stall just around the corner …! 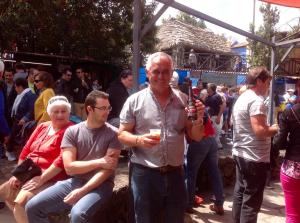 And, J with a Mai Tai #neverbeenknown

😄  Off now for supper at Al Amir, Lebanese … 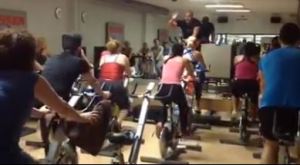 Taken a few days ago after the rain storms. J has been stopped in the street 3 times now and asked directions. By Tenerifiños. I guess this means he is now officially a local … 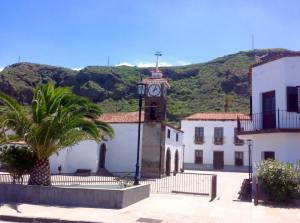 Today, we visited San Juan de la Rambla – a small town and municipality 8 miles west, just outside the Orotava Valley. Very pretty. Lots of farming – bananas, avocados- mostly along terraces. No vines though – I guess it’s not high enough up … 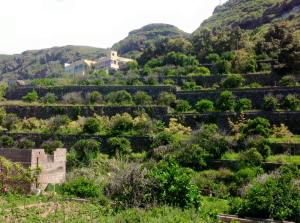 At last – our NIEs (numero de identidad de extranjero/foreigner). The polis in Puerto are really quite scary but glad to say we made it without getting locked up …! 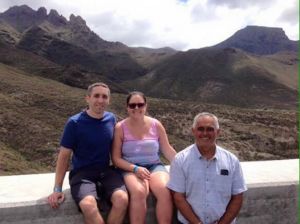 Today it was the 108 GuaGua to Los Realejos, west of Puerto, and back along the coast into town following a well known route called Rambla de Castro. It was originally a guanche (Tenerife’s original inhabitants) trail. The ruin is an old steam engined pump house used for pumping water to the fields and terraces above … 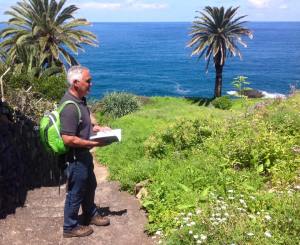 And here’s the route master …

The TF-24 to Teide is closed due snow and ice again. I swear it’s the Tenerife equivalent of Cockbridge – Tomintoul …!

This site uses Akismet to reduce spam. Learn how your comment data is processed. 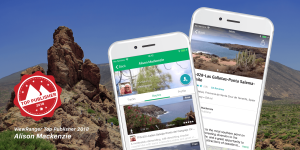 Search for a Walk